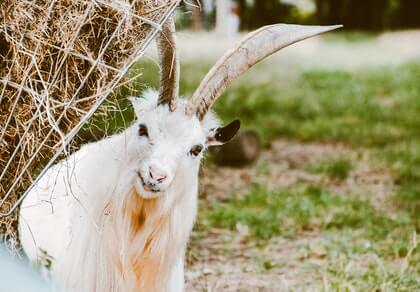 Providing and feeding a herd of goats can be quite tricky, especially when you consider the vast amount of food they require to function properly, due to their complex digestive system.

Coupled with the fact that their range of feeding options is quite vast as well, especially since goats are well known to be able to forage on almost anything, ranging from green grass to woody shrubs.

So do goats need hay in the summer? The answer is no, they don’t require it since they can fare quite fine without, and usually eat mostly grass and other assorted plants instead. Goats can eat hay as well as grass and other plant material throughout the year.

In some cases, goat owners might need to provide food during certain seasons. In these instances, it may be a good idea to feed them with some hay as opposed to green grass or bracken ferns.

Finding or trying to find the best way to feed your goats can get confusing as a result of those facts. In the end, most owners ultimately find the right menu course for their goats, which usually consists of forage, grain and hay.

The use of those three is usually the whole feeding menu for most goats, as they are more preferred than any other option.

As such, feeding any of the three to goats is hardly debated, what does cause an uproar instead, is the right time to feed each or any of them to goats.

What are some good goat feeds?

Before we delve into this debate, it is important to note that there are two major types of hay feeders for goats, depending on how they are kept and fed.

The first being what is known as a “hay net”, which is a small sack made from woven, or knitted material on which small hay pieces are put and tied with a string.

Thus allowing the goats to feed on them by nibbling away at any part of the sack they want.

The second type is known as “hay racks”, which is usually a metal contraption in which large hay pieces are hung for the goats to nibble on.

This type is usually more effective, especially during feeding time as it does not allow the hay to get dirty or wet with other contents in the feeding area, like urine or faeces for instance.

If you have decided to use grains in your feeding menu plan for your goats, you need to know that there is a preference towards different types of grains

This is because certain types are better during warm weather, while others are best to go for in cold months

For instance, oats are usually preferred by goats when it’s hot outside, as they contain more sugar than any other grain. On the other hand, barley is only used during cold seasons since it contains more fiber.

Hay is usually abundant during the spring, as farmers tend to make more of it during this period. On the other hand, hay feeders are sometimes not enough for large herds or groups of goats, especially since they eat a whole lot throughout the day

That is why goat owners often choose to supplement their hay with green plants and shrubs that the goats can feed on as well, like for instance bracken ferns or any other green plant that is available.

Forage feeding can be done during any season, and usually consists of things like hay or grass. This type of feeding is quite helpful since it gives goats an option to get nutrients from other sources apart from grains

So if you’re having a hard time coming up with the right food menu for your herd, then it might be a good idea.

What times of day should you feed your goat?

For a goat as well as some other ruminant animals, hay is an important part of their diet.

When is the right time to give hay to goats – is almost always the question asked about hay and the simple answer is it depends.

Although most people’s answer to that question would be ‘in the winter months’, it isn’t completely correct. Some people say the best time to give any type of feed is when it isn’t too hot outside and during the afternoons.

But in our opinion, that’s not a good enough answer for this question since everyone lives in a different location and weather conditions vary wildly from one place to another.

While it is true that giving hay to goats during the winter season is the proper thing to do, the answer is still that it depends.

Pasture and Hay During the Winter

When in doubt, try to feed your goats in the morning hours. That is always a good rule for feeding any livestock

The reason behind that is because during winter months when it’s cold outside, there usually isn’t much activity happening around pastures or haystacks. This makes it easier for goats to ingest any type of feed you give them.

Make sure you know the proper quantity of feed your goats should receive, including the amount of hay you need to give them each day

The best way to figure out how much hay will be good for your goat herd is by looking at the average weight or body condition score. That way you can always be on the safe side.

On average, a goat that weighs around 120 pounds will need around 10 pounds of hay per day, both as a source of energy and roughage.

During the summer season, it is recommended that you avoid feeding your goats hay during midday or right after they have eaten. This is because there’s a very high chance that the hay will ferment quickly in their stomachs if given under these circumstances.

For feeding domestic goats, the importance of hay can’t be understated. This is because, given the risk of rumen acidosis, it is best to make hay an important part of their diet

When feeding goats during the summer months, you should make sure that the feed they get contains more roughage than usual. This will keep them cool and comfortable.

There are two distinct reasons that justify the importance of hay in the diet of any goat.

The first of which is for the nutrition it provides goats. Apart from their forage or range, hay is the primary source of nutrients for goats.

This is what makes it so pertinent when the winter season comes, it helps cover the drop off nutrients goats will face, as they no longer have access to their forage during this season.

Furthermore, if a good range isn’t available, then hay can be a way to provide them with the nutrients they need.

The second reason that justifies hay as an important food source for goats, is because it provides them with roughage

It does this by helping their digestion system and being able to give your herd the rest they require when sleeping at night. When it comes to feeding, hay should be available at all times.

The reason hay serves as both good roughage, as well as a source of nutrients is in its composition.

There are three types of hay and this classification is based on the make of the hay, which is grass, cereal or legumes like alfalfa or clover.

Hay made from legumes like alfalfa hay is typically regarded as the best type of hay, especially since it has the highest digestible energy, more protein, more calcium, vitamins and minerals than the other two.

Now, as for the quantity of hay to feed goats regularly, it is usually based on certain factors regarding the goats, like the quantity and quality of forage they have available, and if they are lactating and raising kids.

Generally, for an average doe or buck, two to three pounds of hay per day is recommended. This is based on the average weight of a buck or doe, whereas kids need more hay compared to adult goats since they are still growing.

In cases where there isn’t enough pasture available for your goats to graze on, it would be best to provide them with around half a pound of hay per goat each day

Feeding Goats Hay in the Summer

As established earlier, most people believe the proper time to feed hay to their goats or livestock is only in the winter season.

However, this conclusion is flawed since hay should be an important part of a goat’s diet all year-round , even during the summer season

The truth is that hay fed in the summer to goats provides them with both roughage and nutrients for several reasons.

If goats only have access to poor quality forage, then it won’t matter the season, they’ll always need hay.

On the other hand, if there is no forage available for the goats to eat at all, then hay should be fed all year round. This is because it provides them with a source of nutrients and the other is for roughage, which their rumen needs for a healthy balance.

Due to these factors, feeding hay to your goats is always a good idea, however, the only effect the weather or season should have is the amount you feed.

In the summer seasons, you can give your goats little amounts of hay, depending on the amount of forage they have available.

It is important to note that forage, like grass and vegetation, does not contain the same nutrients as your average hay. Even though it may look like hay, pasture or forage can be very low in key nutrients needed by goats.

Hay can be fed consistently without any mind to the weather conditions, the only thing you should alter is the quantity of hay you feed.

When it is winter season, you should give a considerable amount of hay to the goats and for summer or spring, you should still feed hay but the amount would depend on various conditions.

Hay is an important source of nutrients for both lactating goats and their kids since it helps keep them healthy. It also provides the necessary roughage required by all kinds of livestock including goats