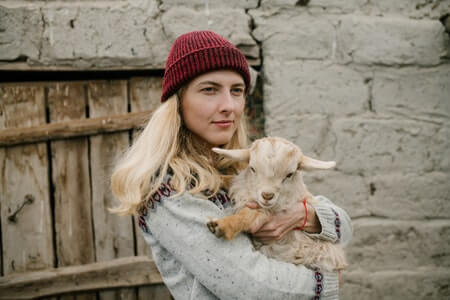 The first sign is usually an increase in appetite as well as urination. Other indications may be increased vocalizations and mounting other female goats or objects such as fence posts, trees, etc. Some can become aggressive or restless while others may just refuse food.

If your goat does not have a mate for breeding purposes then you’ll need to provide one with adequate facilities so both animals can safely interact with each other without worrying about unwanted pregnancies.

It is advisable that you consider separating the male goat from the female after mating especially if they are not a familiar pair.

If the heat cycle of your female goat lasts longer, then you might want to consult your veterinarian who will be able to give you appropriate advice.

How long does a goat stay in heat?

Goats, like many other mammals, exhibit sexual behavior in order to reproduce. Generally speaking, female goats will show signs of heat (aka estrus) every 21 days for a period lasting 7-14 days and can be bred anytime during this time frame.

This is a normal part of the goat’s reproductive process that can be difficult to manage.

The best way to determine if your goat is exhibiting the signs of heat is by looking for behavioral changes such as increased vocalization and restlessness. You can also take her temperature which will typically be higher than normal due to an increase in body temperature that occurs during estrus.

If you hear your goat making what sounds like bleating noises but they are not accompanied by urination then it’s possible she’s just trying to call out for company because she feels lonely on her own!

Female goats often exhibit signs like vulva swelling, an increase in urination, and excessive licking as they enter into “standing heat”.

At what Age do Goats go into Heat?

When your goat goes into heat, it means that she has ovulated and is ready to mate.

Female goats can give birth as early as 10 months, but they should not be bred until they reach 12 – 15 months. However, this can vary depending on the breed and genetics of the animal.

For example, dairy goats tend to go into heat earlier than meat goats because they are bred for milk production rather than meat-producing abilities.

Some signs that your goat may be entering her fertile period include: standing in front of male goats with an arched back while urinating; leaking fluid from her udder; rubbing against other females in the herd; and refusing food or water.

If you are not certain about whether your goat is in heat, you should consider contacting a veterinarian for assistance.

When the breeding process is complete, be sure to examine the male goat before he leaves your property. Make sure that his testicles are back down in their proper place and check both ends of him for signs of blood or fluid leakage. If either exists, take precautions to clean the affected areas with water and vinegar.

You should also make sure to wash your hands after handling any reproductive fluids as these can carry various diseases if they come into contact with open wounds or eyes.

Can goats get pregnant when not in heat?

No, goats cannot get pregnant when they are not in heat. Female goats (does) do not go into heat as female dogs and cats do. They can only get pregnant during their estrus cycle which is usually between November and February each year.

However, they do become sexually active at a very young age. In the wild, goats will often mate with several different partners until one of them conceives.

For the rest of the year, does are anestrous or non-receptive to male advances.  The good news for goat owners is that there are many other ways to breed your livestock besides just waiting until they’re in heat.