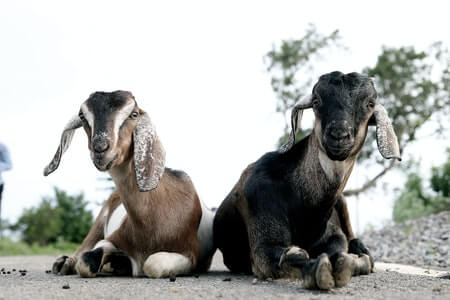 I’m sure you’ve heard that goats are amazing. They’re intelligent, friendly, and they produce milk. One of the most interesting things about goats is how much they can vary from one goat to another. This is true for many reasons; some breeds come in different sizes than others, their diets will affect them differently depending on what type of food they eat (such as hay vs grain), or they may be mixed breeds.

So if you may be wondering what does an average goat weigh? The answer is about 120 pounds. It’s also important to note that there are many different breeds of goats with varying weights like Nigerian Dwarf Goat (90-120 lbs), Nubian Goat (125-200 lbs), and Boer Goat (150-250 lbs). All these types of goats have their own unique features and personalities which makes them all special in their own ways.

There are many factors that affect how much a goat weighs, including breed, age, diet, and health.

The most common breeds for milk production are Nigerian Dwarfs and LaManchas weighing between 80 – 120 pounds on average. It’s important to note that these weights vary depending on the individual animal.

Female goats tend to be smaller than males and can usually weigh anywhere from 60-150 pounds whereas males generally range from 90-200 pounds depending on factors such as breed and age. Male dairy breeds often exceed 200 pounds while meat breeds may only reach 150 pounds at most.

Average Weight Of A Boer Goat

Boer goats are a relatively new breed of goat that is bred for meat production. As such, they have been selectively bred to be larger than the average dairy goat and weigh about 200 pounds on average. If you’re interested in raising Boer goats, it is worth noting that they are known for their docile nature, high milk production, and great mothering skills.

Boer goats are a popular choice for goat owners because of their calm and docile demeanor. They’re also one of the largest breeds, making them an excellent meat source.

But how much do they weigh? The average weight for a Boer goat is 200lbs at full maturity, but this varies based on age and breed.

Boer goats have long, droopy ears and short, thick coats that can come in many colors. Boers come from South Africa where they were bred to survive the heat without needing much water. They are resistant to parasites which is why they’re often used for meat production.

This makes them perfect livestock animals as it doesn’t require too much feed or water making them an economical choice for those who live in hot climates or areas that receive little rainfall such as the desert regions of North America and Australia.

How Tall Is The Average Goat

I bet you would have guessed it was fairly tall, wouldn’t you? Well, I have some sad (but hopefully good news for you) news.  According to my research, the average height of a mature goat is only 3 feet, 9 inches.

In fact, if you consider that most adult humans are 5 feet, 6 inches, or more, it makes goats downright puny.

In fact, when compared to other farm animals, they are one of the shortest-statured species. (For the record, horses and cattle are the two largest species of livestock with an average height of 5 feet.)

Goats are still useful animals to have and own.  In addition to being one of the shortest-statured species, goats are also one of the most agile and nimble-footed.  They can jump as high as 7 feet!

Goats are very curious and will explore just about anywhere. Plus, they are among the most independent-minded and stubborn of all farm animals.