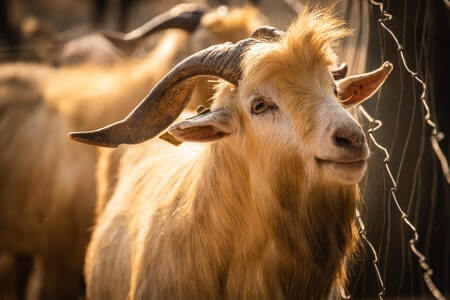 There are many ongoing studies of goat vision and the results vary. On one hand, some say goats can see in color while others argue that they cannot. The answer may depend on what type of colors we’re talking about.

In general, goats see colors in a spectrum that is similar to ours but not quite as vibrant or intense. They can’t see reds or greens at all, but they do see blues and yellows very well.

The number of cones a goat has determines what color it can see best. For example, goats with only two cone types cannot distinguish between red and green colors because they both look yellow to them.

What is Color Vision and How Does it Work?

Color vision is the ability to distinguish between different colors. It works by absorbing light waves of varying lengths using cone Opsin proteins in your eyes, which are tuned to absorb either short (S), medium (M), or long (L) wavelengths of color.

The retina of the human eye contains three different types of cones that are sensitive to short (S), medium (M), and long (L) wavelength colors.

Since all goats have dichromatic vision, they cannot distinguish between red and green color wavelengths because they both look yellow to them.

Why do goats have only two colors of light-sensitive cells in their retina?

The goat’s eye is similar to a human eye, with a lens, cornea, iris, and retina. Goats, however, have rectangular-shaped pupils. The pupil determines the amount of light that enters the eye.

These pupils give goats a field of vision of 320-340 degrees. This is opposed to humans who can only see 180 degrees without moving their heads.

The special shape and size of the pupils that the goat has, allows it to have more control over how much light enters the eye.

This allows them to see more easily at night.

What are the advantages to having this type of sight?

This also helps them because they live primarily on open grasslands with a low brush where it’s often too sunny during the day or too dark at night.

It also gives them good peripheral vision so they can watch out for predators like coyotes, bobcats, and mountain lions who hunt their prey by stalking then attacking from behind without warning.

The answer to what color your goat sees best is that goats see colors differently than humans do. To a human, if you stare at the red light for too long it becomes uncomfortable but to a goat, they are just as comfortable with both colors.

This can be attributed to their dichromatic vision which means they have two different types of cones in their eyes.

One type absorbs green and blue wavelengths while the other cone absorbs yellow, orange, and red wavelengths. So when looking at an item with all three colors together, like green grass with brown dirt mixed in or pink flowers with purple stems, goats are able to distinguish the difference more easily.

Having this vision allows them to see more shades and hues of colors which also helps when distinguishing between poisonous plants.

This is due to the fact that goats can generally eat anything they come across because their diet consists mostly of weeds, shrubs, and leaves off trees that most other animals cannot consume.

However, since there are many different types of poisonous plants around the world it is beneficial for goats to distinguish these from non-poisonous ones or even just foods in general by being able to see certain wavelengths better than others.

Do Goats like Carrots because they think they’re Orange (or Yellow)?

The answer is no.

It’s not an easy question to answer, but it is a fun one! Just like humans, goats have color vision and are not colorblind, but they don’t see the same colors as humans do either.

If your goat loves carrots, they might just love them because of their color rather than their taste. After all, if the carrot was purple instead of orange or yellow would you still eat it?