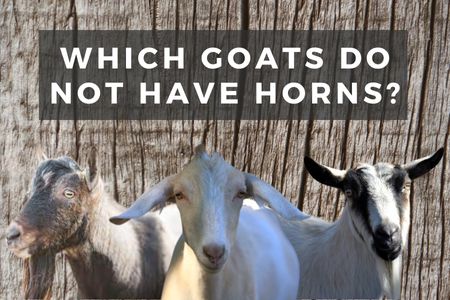 Out of all the animals in the world, goats might just be some of the most versatile. They can be kept as pets, used for their milk, meat, and fiber, and even trained to do tricks! But did you know that not all goats have horns?

In fact, there are several breeds of goats that are naturally hornless. These breeds are often smaller than other types of goats, but they are no less hardy or capable of thriving in a wide range of climates and environments.

Despite their small size, these hornless goats are well known for their playful and curious personalities. They love to explore, jump, and play in the grass or on heavy duty equipment, making them great pets for families with young children.

And while they may not be as large or imposing as other breeds of goats, hornless goats are still perfectly capable of providing milk, meat, and fiber for their owners.

Let’s have a look at some of the most popular hornless goat breeds out there today.

Some of these include:

These energetic and intelligent goats are known for their long, floppy ears, large size, and friendly personalities. They are great producers of both milk and meat, making them a popular choice for many dairy farmers.

Nubian goats are a type of dairy goat that originates from the Nubian Desert in Northeast Africa. Nubian goats are characterized by their large, floppy ears and long, slender necks. They are also known for their high milk production; on average, a Nubian goat can produce 2-3 gallons of milk per day.

Interestingly, Nubian goats are the only breed of dairy goat that is not naturally hornless; however, many Nubian breeders will dehorn their goats for the safety of both the animals and the people handling them.

Native to the Saanen Valley in Switzerland, Saanen goats are distinguished by their all-white coats and often have blue eyes. Like Nubians, Saanen goats are not naturally hornless; however, many breeders will dehorn them for safety reasons.

Saanens are known for being calm and gentle animals, which makes them ideal candidates for milking and other forms of livestock husbandry. They also produce large quantities of both milk and meat, making them a popular choice for dairy farmers and goat breeders alike.

If you’re looking for a pet goat that is naturally hornless, the pygmy goat might be the perfect choice for you. These small, compact animals have short legs and long, fluffy coats, and are known for their playful personalities.

Pygmy goats can be kept as pets in small yards or even indoors if they have plenty of space to roam and play.

Although pygmies are not known for being particularly good milk producers, they make up for this with their friendly dispositions and adorable appearance. Many people even keep pygmy goats as household pets and enjoy teaching them a variety of tricks and training them to walk on leashes.

Toggenburg goats are another type of Swiss dairy goat. They get their name from the Toggenburg Valley in Switzerland, which is where they originate from.

Toggenburgs are characterized by their brown coats with white stripes running down their faces and chests. Toggenburgs were the first breed of dairy goat to be exported to North America, and they remain one of the most popular breeds today. Like Saanens and Nubians, Toggenburgs can be dehorned if desired.

Alpine goats are a type of French dairy goat. They get their name from the Alps mountain range, which extends through parts of France, Italy, Switzerland, Germany, and Austria.

Alpines come in a variety of colors, but they all share the distinguishing features of upright ears and short horns (which can be either black or white). Alpines tend to be less stubborn than other types of dairy goats, which makes them easier to handle for both beginners and experienced goat keepers alike.

Angora goats are a type of fiber Goat originating from Ankara province in central Turkey. The primary use of Angora goats is to produce mohair fiber, which is harvested from their long coats twice a year.

Angora goats must be shorn regularly to prevent them from overloading on fiber; if left unshorn, an Angora goat’s coat can easily become tangled and matted. Because they require more intensive care than other types of goats, Angoras are typically only kept by experienced goat keepers.

Boer Goats are a type of meat Goat originating from South Africa. The name “Boer” comes from the Afrikaans word for farmer. Boer Goats were originally bred for meat production, but they have also gained popularity as show animals and pets in recent years.

Boer Goats are characterized by their large size and distinctive red coats with white markings. Some Boer Goats may also have horns, although many breeders will dehorn them for safety reasons.

Why Some Goats Don’t Have Horns

If you were to ask someone why goats have horns, they might not know the answer. In fact, many people don’t know that there are actually goats that don’t have horns! So, why is this? Let’s take a closer look at the different types of goats and see if we can figure it out.

There are two main types of goats when it comes to horns: horned and polled. Horned goats are the type that most people think of when they think of a goat; they have two horns sticking out from the sides of their head. Polled goats, on the other hand, are genetically hornless. However, both types of goats can be found with either black or white fur.

So, what’s the difference between these two types of goats? Well, horned goats are the result of a genetic mutation that occurred about 10,000 years ago.

This mutation caused the Proceed protein to be expressed in the outer layer of skin cells, which resulted in the formation of horns. On the other hand, polled goats lack this mutation and thus do not have horns.

Do All Goats Have Horns?

No, not all goats have horns! While the vast majority of goat breeds have horns, as shown above, there are quite a few breeds that are naturally hornless.

Over the years, farmers and breeders have selectively bred goats for various traits, including size, coat color, and milk production. In some cases, breeders have also chosen to breed for hornlessness.

While there are a few reasons why someone might want to breed a hornless goat, the most common reason is simply that it’s easier to handle a hornless animal. Goats with horns can be more aggressive, so they can require extra care and precautions when being raised or handled.

So, while goats that don’t have horns may seem like a rare occurrence today, it’s important to remember that many of the most common goats are actually naturally hornless.

As you can see, there are several different kinds of hornless goat breeds out there! Each breed has its own unique set of characteristics that make it well-suited for different purposes.

Next time you’re at a petting zoo or see a goat out in a field, take a closer look and see if you can spot the difference between a horned goat and a polled goat. You might be surprised to learn that not all goats have horns.