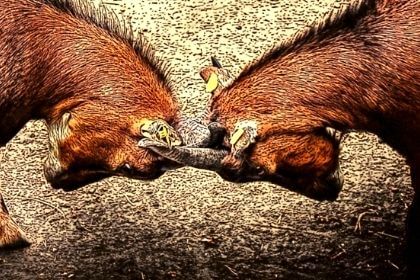 Having a goat as a pet is a unique experience that is quite unlike any other. This is because they do not have the common quirks of other household pets.

You may be wondering why goats headbutt, but the real question is what are they trying to do when they headbutt?

Goats try to communicate using body language. They use their horns and heads to show dominance or submission in order to maintain a stable social hierarchy.

A goat will butt the other animal on its neck or shoulder with its horn in an attempt to pin it down. This is usually accompanied by grunting sounds that are sometimes translated as laughter.

This behavior can also occur during playtime between two goats who have decided that one of them is dominant over the other, which is often seen between males.

Goats are social animals that live in herds. Therefore, they have some form of unspoken hierarchy amongst themselves.

Ritual fighting, aka headbutting is a natural practice among them, especially during the mating season. Males will head-butt other males, showing high levels of aggression, competing for the rights to create the next generation of goats.

If you happen to keep goats as pets and this occurs, you’ll have to intervene to prevent their instincts from endangering them.

It may be a good idea to separate the goats and place them in different pens. If you want, you can also do some training exercises to distinguish between the dominant and submissive animals

When a predator is near, goats will headbutt each other with force in order to warn each other of impending danger. This is often accompanied by a shrill cry, similar to the sound of an air-raid siren.

Their instinctive response is to do this when they are feeling threatened in any way, whether they are being chased or if their territory has been invaded

If you see your goats headbutting each other too frequently, it may be an indicator that there is a predator lurking in your area

Sometimes, during interactions with humans, you might find cases where goats attempt to engage in headbutt contests with people. Amazing, isn’t it.

Goats, like most farm animals, are prey. This means that they are conditioned to have a fight or flight response amongst animals and persons that they perceive to be predators.

Some goats, in response to threats, attack their perceived predators head-on. Of course, you’ve got to admire their bravery in their stubbornness.

When children provoke goats, by imitating goat behavior, it only encourages the goat to attack them. So, if you find yourself in a tough situation where a scared goat is charging to head butt you, simply remain still and wait for it to calm down.

In some cases, the best thing to do would be to slowly walk away from the goat. Do not use your back as a moving target because it will only encourage them to attack you more.

Headbutting can also be used for mating purposes – this typically happens during the breeding season.

Female goats will butt at their male counterparts in order to show sexual interest. However, male goats have been known to use headbutting as a form of intimidation and dominance over the female goats during mating season.

In cases of either gender, a goat will butt at its human caretakers to show affection, playfulness, and dominance. So you might have been put in this position before without knowing that was their intention.

Headbutting is sometimes a form of playful fighting among goats. It is a natural behavior that is required for social interaction among themselves.

They circle, rear up, and land for a solid headbutt. It’s a little different from how sheep do it because where the goat circles round, sheep back up.

Just like human children, goats engage in a bit of roughhousing to play around. So you’ll be able to catch them wrestling from time to time.

In this context, it is mainly a way to strengthen the bonds between them and keep their communication sharp.

Cows are another species that engage in headbutting as part of their play fighting activities. It serves as an indicator of dominance over one another so they may establish themselves as leaders.

Sometimes, headbutting is a sign of stress in goats. It could be as a result of a perceived predator within their vicinity such as your dog, your guests, even your children.

They become fearful in situations such as these and typically retreat in these situations. Although when they are cornered their fight-or-flight response results in them headbutting.

The older your goats are, the more they succumb to stress. They can be easily startled and have bad temperaments.

This could make them headbutt other animals and people. An easy method to calm them down when they are stressed is to grab them and pin them down for a minute. It seems counterintuitive but it works.

Besides these reasons, there are also why goats headbutt humans, other animals, trees, each other, and fences.

Let’s delve into them.

Humans: As discussed earlier, if your pet goat charges towards your friends and headbutts them, it is likely because they are unfamiliar with them.

Their survival instincts cause them to fight and engage in a headbutting contest which they’ll lose but still engage in any way.

If they do this among kids it can be dangerous because they have pointy horns. In a situation where a frightened goat is aiming to headbutt people you, simply tell them to lie down flat on the ground as it calms them down and dispels the threat.

Fences: So this is weird. Why would they headbutt fences? Fences are not intimidating. Well to answer that, it is simply done out of frustration.

Immediately you notice this behavior in your goat, you need to put an end to it as it can injure itself. To lessen their frustrations, introduce them to a green environment and surround them with other goats. Social interactions calm them down.

Other Animals: Headbutting is a psychological trait among many animals including cows and sheep. This practice is often a result of playful fighting, survival, or fear.

Oftentimes it is not dangerous but you should keep an eye out for any signs of aggression when your pet goat is associating with other animals.

Although it is often advised to keep different animal species separately, I’ll strongly recommend it if you’re keeping your goat as livestock.

Other Goats: Goats headbutting each other is normal behavior. It helps them expel energy. It also helps them establish a hierarchy.

Headbutting can get very severe during mating season, as male goats show increasing levels of aggression. In the wild, this can go on until the other goat quits the challenge.

If you notice this behavior among your pets, you can always isolate them to stop this behavior. They are genetically coded to headbutt each other and their horns and skulls can withstand the pressure.

Trees: Goats sometimes headbutt trees. It is unusual and mostly occurs when they do not have other goats to interact with.

Goats are intelligent enough to make their fun when they aren’t having any. The only reason why they do this is that it entertains them or relieves boredom.

In this case, you can put them in a green environment where they have other goats to socialize with. Introduce them to friends or just let them run around in a pasture

Since these behaviors are so frequent among pet goats, you should observe your goat for any signs of aggression and keep an eye out for common causes of stress.

If you notice any signs of fear or aggression when playing with the goat, immediately take it to a secluded area and let it calm down.

If you have got goats as a pet, there are ways to limit the headbutting behavior among them.

Simply understand their hierarchy, reward them for good behavior, allow them to interact by carefully introducing new goats to the herd.

Use a long elevated trough for feeding them so they do not headbutt while eating, and finally, you can dehorn them while they are young if need be.

Also, keeping a goat on its own as a pet can be sometimes lonely for them and they might go headbutting trees and fences. Introduce them to other goats and let them socialize with others so they can expel their energy without hurting themselves

With these practices, you’ll have a tame goat that isn’t dangerous to its environment or surroundings. This is important if you are keeping your pet in the vicinity of children or valuable property.