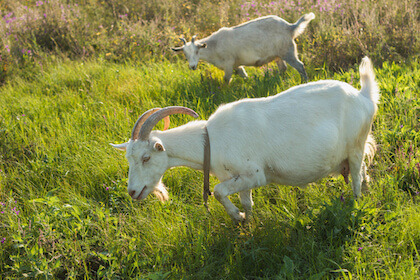 Did you know that goats wagging their tails is a sign of happiness and contentment, much like the smile on your face when you’re feeling great?

Goats wag their tails to tell you what they’re feeling – whether it’s excitement, fear, or anger. In my experience as a goat owner, this has been one of the most useful ways to understand and interact with your pet.

Certain goats may wag their tails more frequently than others and it is not something to be alarmed about. To find out if there is something wrong with your goat, you should pay more attention to your goat bleating.

When it comes to wagging their tails, goats often do it for good reason.

There are several reasons why a goat may wag its tail. It is possible for the wagging to occur spontaneously but usually, there is always a reason behind it. Wagging the tail is sometimes dependent on the age and sex of the goat.

The common reasons for a goat wagging their tails include:

Sexual arousal among animals is a common occurrence, and when it occurs, there are ways to identify it. Commonly, there are pheromones emitted by the females to attract the males when they are sexually aroused.

Likewise, female goats will wag their tails when they are sexually aroused.

Sexual arousal among animals is different than amongst humans. It doesn’t occur in spontaneous moments or reactions to visual stimulants. Instead, sexual arousal occurs in specific periods where the female is likely to mate with any desirable male.

This period is usually referred to as heat and it is a common occurrence in all animals. In the case of goats, the females wag their tails and signal to the male that they are willing to mate.

Other things accompany the wagging of the tail, including a swollen vulva and bleating noises.

If these other signs are absent, then the tail wagging could be an indication of something else, not heat. If you are rearing the goat in isolation, then you will need to introduce a male when you notice that the goat is in heat.

Animals pay no attention to hygiene, and goats are no exception. Goats urinate and defecate anywhere they see fit, at any time, including where they sleep. This will inevitably lead to the goats emitting odors, especially around the excretory organs.

Flies are attracted to the odor of a goat and will consistently settle on these areas. This is usually uncomfortable for the goats, and they will always try to get rid of the flies by any means necessary.

As these excretory organs are located underneath or close to the tail, wagging the tail can help to remove the flies.

In the case of female goats, when they are on heat, the discharge that is emitted from the vulva can also attract the flies. Luckily, wagging the tail can also eliminate the flies that settle there.

You can reduce the rate at which flies are attracted to the goat by bathing them regularly. You will, however, need to do this regularly as goats love their smell and will probably find a way to get it back. Goats are unique animals, and they should be treated that way. What works for other animals will not always work for them

If you want to learn more about what your pet can do, then sign up for a class on animal husbandry. Even small classes offer excellent insights into how to handle larger livestock like goats.

This scenario applies to infant goats as they wag their tails for easy identification by their mothers. When goats are newly born, there isn’t any way to identify them so the mother has to do so by smelling them.

The smell of a goat’s behind is usually unique to that goat, so the mother can identify her kids.

The scent is so strong that even when other smells are present, the mother will still be able to perceive it, thus, identify her kids.

Goats are aggressive and when one finds a kid that isn’t hers trying to suckle, she will aggressively chase it away using her horns.

Even animals can show affection as is evident by the reaction of dogs to seeing people they like. So too it is with goats as they tend to wag their tails when they see someone they like.

This behavior is most common to both males and females, even with kids. When the goats see the owner, there is going to be some sort of affection like the goat wagging their tail.

Over time, this behavior helps to show affection and it is not surprising to see them protrude their tails in an inviting manner, wanting to be petted by these individuals. The goats are so sure of themselves that they wag their tails even with strangers around.

It is, however, important to note that the tail wagging action will be more pronounced in certain cases. The same applies when they see their owner after a long time especially if they are young goats

If you want to get the goat’s affection; petting them on the head should do the trick. They love attention and will certainly let you know.

To Signal their Mood

Animals have moods the same as people but they indicate their moods quite differently. Most common among kids, this trait doesn’t appear in adults. Their mood can be influenced by seeing food, their mother, or even their owner.

Regardless, they are often happy and this is reflected in their tail wagging. What is most interesting about their moods is that most kids seem to wag their tails when they are half-asleep.

This motion makes them appear like they are dreaming about something pleasant, thus, showing how relaxed they are at the moment.

Many people think that this is an invitation to pet the goat but this is usually not the case, so don’t be surprised if they avoid your touch or react violently. The older they get, the less they will wag their tails when they are half-asleep.

When they want something

Goats love to eat and the chances of them wagging their tails when seeing some food is quite high. It can be hay or food pellets or whatever meal you may have for them.

This is especially true among younger goats who haven’t had any proper training yet. As time goes by, they will become more disciplined and you won’t see them wagging their tails when they are hungry.

The only time you can expect to see them wag their tails when seeing food is when they are young goats in the wild. As kids, it is normal for them to follow each other and eat together since there aren’t many means of feeding.

This behavior is also seen when they are playing around, showing how free they are in whatever motions they display without any fear or worries at all.

When the tail wagging action is only present when there are no food elements around, it can be an indication that something else is going on psychologically.

It isn’t possible to see one goat wagging its tail for all the reasons listed above, but a combination is possible. It is easy to identify the cause of the tail wagging as there will always be other things accompanying it.

So, you shouldn’t worry about your goat wagging its tail as it’s always a good sign.

Goats are so sure of themselves that they wag their tails even with strangers around. Over time, this behavior helps to show affection and it is not surprising to see them protrude their tails in an inviting manner, wanting to be petted by these individuals.