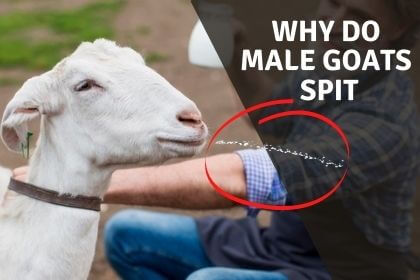 If you’re rearing goats or planning to rear them, it makes sense that you should know what you’re getting into. You will need to know what to feed them, what they like to do, and most important, reasons for their actions. This will help you raise your goats better and their behaviors will no longer seem strange.

Goat behavior that may seem weird includes mounting, drinking urine, and spitting. All goats spit, but there is a different meaning attached to it when a male goat spit.

So, why do male goats spit and what is the difference between when females spit or goats spit in general?

Male goats have a gland under their tongue that secretes pheromones, which they use to mark their territory. When they spit, it is not only a territorial warning but also a way for males to compete with one another for mating rights with females.

Male goats spit simply to attract a mate and woo a female member of the species. The behavior may seem weird but it seems to work for them. You will notice that the behavior is more aggressive in some males than others but it’s nothing to worry about.

Just as different humans have different levels of sexual activity and tolerance, the same is often seen among goats.

The behavior is most common in mature males and you may notice that even some young males are displaying this trait. This is no cause for alarm, as it simply indicates that the goat in question is sexually mature.

Some male goats can reach sexual maturity as early as seven weeks, so even younger goats can be seen spitting.

When is the Goat Mating Season?

As spitting is part of their mating rituals, you can expect to see more of it during the mating season. In this period, there will also be a lot of mounting, screaming, and yes – spitting.

At some point, you may even see the goats curling their tongues at each other. It is the goat equivalent of licking and smacking lips at a person where there is sexual attraction.

Once the mating season has ended, you may still notice these traits, but it will always be in moderation compared to the mating season. The mating season for goats stretches over the months of September to December. There is also a smaller breeding season between March and May, but it’s not as important.

Even when the goat mating season has come to an end, you may still notice that your male goats will still show these behaviors like mounting and spitting at one another.

That means that mostly through the autumn, it will be mating season for goats.

The fact that it is mating season doesn’t mean that the goats will be mating all the time. It simply means that the females will be in heat at regular intervals, giving the males a greater chance to mate with them.

It is important to note that the mating period can vary based on location, the species of the goats, and the personalities of the goats as well. You will however be able to notice mating season through all the weird behaviors they will display.

Farmers typically use this window to introduce males with desirable traits to females, hoping to create strong young. The males will show dominance through activities like spitting and mounting, with the most dominant male getting first dibs on mating rights.

Goat owners should never allow their pets to mate outside of this designated period. It is harmful to the goats as well as for everyone else involved since it can lead to serious injury.

What else can the spitting mean?

Not all spitting is a male goat trying to woo a female, especially since females spit too.

Goats can spit so frequently that it becomes difficult to tell if they are trying to woo another goat. When attempting to woo a female, the male will generally spit in her direction.

Anything else and the spitting is not intended to woo or court another goat.

So, what else could the spitting on goats’ part mean? There are a few other things that your goat spitting can indicate.

A part of the digestive process

Goats don’t digest meals like humans but they do digest it all the same. Anyone familiar with the anatomy of a goat will tell you that they have four stomach chambers.

As a result, they have this habit where they chew food they had eaten earlier to move it to a different stomach chamber. The process is known as regurgitation and animals who do this are referred to as ruminant animals.

Goats engage in the practice and you can find them chewing even when they aren’t close to anything edible. As they chew old food, they filter seeds and any particles stuck in the grass out and they spit it out.

You may notice it when they are eating fresh grass and it is simply to remove things they don’t want to eat. These particles cannot be digested and the goats have to eliminate them.

This spitting can sometimes be the reason why you find trees growing in places where you don’t recall planting them. The goats spit out seeds that are stuck in the grass and spit them out in a different location. If it happens to land on favorable ground and germinates, you can expect to see a tree or grass there sometime in the future.

This is such a common occurrence that it has become an important ecological process and has many environmental benefits.

In a world where people are trying to be more conscious about planting more trees, it turns out goats have been doing it all along.

This will only be the case when the goat has ample grazing land with fertile soil, or else, the seeds will fall off and not germinate.

Spitting to express emotions is a trait that is common among animals and even humans. Goats do the same too especially when the emotion they are trying to express is anger.

The sexual attraction is also a strong emotion which is why goats happen to spit as part of their mating rituals.

When it comes to anger, spitting is also accompanied by bleating, screaming, and in some cases, a display of aggression.

It is important to remember that it is a natural occurrence for goats and doesn’t need to be interrupted as it may simply be part of herd politics.

When your pet is attempting to show that they are angry or upset, let them express themselves. Spitting is a way for them to get out the emotion of anger especially when confronted with predators.

Spitting can also be a sign of fear but if it happens suddenly and doesn’t happen whenever the goat is in danger, then it may be a form of expressing fear

You may see them chewing food with more energy all of a sudden or they can just spit something out without any reason at all.

This behavior is an important part of the natural defense mechanism that keeps them safe from predators.

Domestic goats are not exposed to anything dangerous which is why the fear-spitting mechanism fails to kick in quickly when they are in close contact with humans.

Goats are used for various purposes, including companionship so it may be a sign of being overwhelmed or scared by something new.

The biggest reason why goats spit is that it is a part of mating rituals. All other reasons stem from this which is why they don’t usually spit when they eat out of a feeder.

They also won’t typically show signs of anger or fear without cause because those emotions are not present in their lives as pets.

In the wild, however, it would be a different story as these behaviors help protect them from predators. You can expect to see spitting all throughout their lives but the frequency decreases as they get older.

When you consider that goats are ruminant animals, it can also be a sign of regurgitating food for their young ones. So don’t panic if your goat is vomiting clear fluid.

Regardless of the reason for the spiting, it is clear that spitting in male goats is not an issue.